A lot of people’s perspective when they have heard of the word “Story Telling”, Almost all of them were thinking of speaking! Well then, we should change this perspective. Telling a story can be told in many different ways including podcast, a piece of writing, and even a picture. A class called multimedia storytelling, we have learned a lot of ways that we can tell a story and first of all, we learn about telling a story through a comparison image. Now let’s see the picture in the link and make some prediction:

Python is one of the programming languages for the computer. In Multimedia/Technology we have learned a lot of Python language and practicing coding as our assignment. I never learned Python or even any of the programming language yet, but after this learning round, I was so interested in computer science including Python. There are a lot of things that we learned from Cindy(Multimedia/Technology facilitator) such as Booleans, Comparisons, Indentation, If statement, Eif statement, Ese statement, And, Or, Not, etc. Every week we always have the assignment as we have learned a lesson. I was having a lot of struggles during many assignments. One of the hardest assignment that I get so stressed about it is finding the prime number. On the day that Cindy teaching us about the lesson that related about finding the prime number, I was on a trip for my exploration and it was so hard for me as my brain thinking too much solution to find the prime number. I was asking my friends and asking them to help me and explain to me include giving me some clue on the assignment. Badly I wasn’t understand anything that my friends told me. I go on the internet and search for the prime number. There is a website load on the top and give me the definition of prime number. I read the definition and I understood how to find the prime number and luckily I can solve the assignment. I was so happy and excited about solving this really hard coding assignment. Here is my code to find the prime number.

On the second round, Multimedia/Technology essential was focusing on photography. My passion isn’t really like photography, but after talking this lesson I felt that photography is a really interesting topic to learn.

Aperture is mostly talking about size of opening in the lens through which light enters the camera.

Programming must be the process of talking the algorithm and also encoding it into the notation. Programming have many different types of computers exist, but it must be have the solution. Computer science is not the study of programming, however it related to computer scientist does.

Programming is also include math. Algorithm is the strategy or rule of solving problem that mostly for computer. Algorithms can perform calculation, data processing and automated reasoning tasks. The concept of algorithm has existed for centuries and the use of the concept can be ascribed to Greek mathematicians (the sieve of Eratosthenes and Euclid algorithm). This is my challenge for you as the reader in my portfolio. Please find the sun from 1 to 2000 and the this is the clue “DO IT RIGHT!”.

There are 1 million box with the same side and weight and all of them looking the same, there is a frog that died in one of the box and those box is a really important box for your family. How can you find the frog and knowing which box does the frog is? This is easy if you know the answer. Divide and Conquer is finding the answer by asking smaller questions from the big question and find the answer to smaller questions and end with the answer to big question. This is an example for Divide and Conquer: It was 10 minutes to midnight on December 24th, and all was not well at the North Pole. Some little elves were wrapping 1024 toys for 1024 good girls and boys. At 5 minutes to midnight, the elves called Santa Claus to tell him the boxes had been filled extra quickly, and Santa Claus was getting ready to leave. And this is the answer:

Your challenge is to solve the problem above that I said at first!

Liger Leadership Academy students are English Language Learners. They have been immersed in English since arriving at Liger, We pride ourselves on prioritizing process over product. Please excuse any English errors as part of the learning continuum our students have taken over the years. 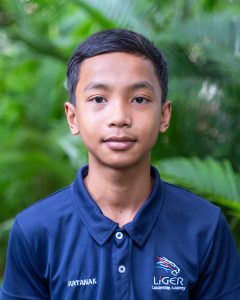 Welcome to my Portfolio! My name is Ratanak, and I am a student at the Liger Leadership Academy. I currently live and study at the Liger Leadership Academy, Phnom Penh, Cambodia. I am now living in Liger, Phnom Penh, but I born and raised in Svay Rieng province. I believe that I’ll be a change agent of Cambodia and as a change agent, I need become a positive and achievable student in order to change Cambodia and the world in the future. Liger Leadership Academy is a project-based learning school which is providing students with opportunities to be prepared to be a change agent in the future. I am not really sure which I wanted to be in the future but what am I think about now is to be an engineer. One of my tasks, if I could be an engineer, is to make the tallest building in Cambodia and the world. Please enjoy reading my Portfolio to get more ideas about me and if you have any question, comment below and I’ll answer or reply back as soon as possible!!